Starting with model year 1975, VW busses of the era featured fuel injection via Bosch's L-Jetronic system, with an analog Electronic Control Unit (ECU) to manage fuel induction. Over the years Bosch and VW produced different types of ECUs, with a plethora of part numbers. This guide seeks to provide a reference to their application and interchangeability.

Most of the L-Jetronic ECUs in VW busses operate in an open control loop, by sensing engine speed and load as the essential inputs, and converting them to injection time (ti) as output for each driving condition. The last model year (1979) featured a closed control loop with a lambda sensor to sense and feed back the air/fuel mixture density.

The output stage drives the fuel injectors directly, by opening their valves with a pulse width equivalent to the calculated injection time.

It is a fully analog control unit, with no microcontroller or firmware. It is mostly built with discrete electronic components and generally 3 custom Bosch integrated circuits that perform the Pulse shaper/divider, Division control multivibrator and Multiplier functions.

In addition to the fundamental engine speed and load inputs, other variables also play a role in adjusting the final injection time. These are listed here in terms of ECU capabilities that were added or removed depending on the application:

Post-start enrichment – After the motor has started, an additional quantity of fuel will be injected as means of enrichment, that will be dependent on time and engine temperature (TS2, ECU).

Intake air correction – In order to compensate for the physically induced measuring error of the air flow meter, the injection time is corrected as a function of the intake air (Air flow, TS1, ECU)

Full load enrichment – when a full load event is detected via the Wide Open Throttle (WOT) switch, the injector time is extended to enrich the mixture (WOT switch, ECU). Only busses from model years '75-'76 and '79 California featured a WOT switch.

Anti-bucking – When bucking occurs, it is assumed that the load changes are smaller than in an intended acceleration. If a load change occurs below a certain threshold value, the control variable will not be the newly calculated value of the slightly changed load, but instead it will be an approximation of this new value (Air flow, engine RPM, ECU).

Almost all VW Type 2 ECUs are interchangeable with either moderate or no extra effort. The only exception is the '79 CA ECU, which would require major harness modifications.

There is no difference in manual vs. automatic from the ECU point of view.

Some things to notice on compiling this overview:

All engines in Volkswagen Type 2 busses from 1968 to 1979 were stamped with a serial number, including a two-letter code. Here's a vintage bus owner's guide on how to decypher the engine code. Quick links ⏩ Take me to the engine codes list ℹ️ Why do I need the engine 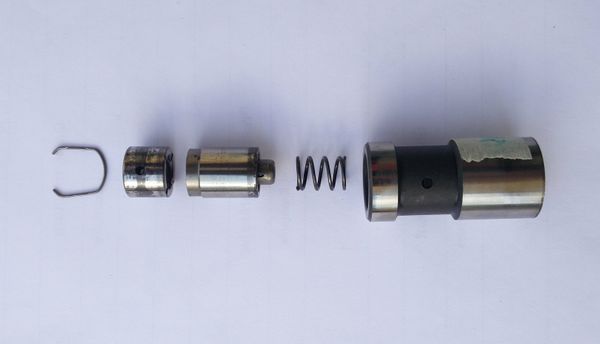 A quick guide on removing air from hydraulic valve lifters (bleeding), such as those used on the fuel-injected VW Type 2 bus. Why do hydraulic lifters need bleeding? The main goal is to ensure that before installation, hydraulic lifters are properly filled with oil and oil only. By bleeding them,